Hello From the Other Side

Do you believe in magic? I do.

There are places in this world with magical energy. Energy to heal people, energy to access the divine, and energy to communicate with the other side. Maui is one of those places.

I started going to Maui when I was 6 years old. It was there that my Dad fell in love with diving and the family stopped fighting for the first time in what felt like my whole life. It was a healing place for us. A special place where we would step off the plane and immediately everything was okay. As if the warm air wrapped its arms around us and the winds swept away our worries. We would go every few years, sometimes every year, around Christmas to celebrate Hawaii-style, sun burnt and belting “Mele Kalikimaka”. Many say that a white Christmas is magical, but for me nothing beats a palm tree strung up with colored lights and whales breaching in the distance. Who needs lawn decorations when you have dolphins jumping in your backyard.

I decided that I wanted to be a marine biologist that first year we went to Maui. I became obsessed with learning about whales and dolphins. I memorized every species and bought every whale tail necklace Mom would indulge me. Praying every second of every day that I could one day swim with them. It was that trip that I first learned the power of setting intentions and felt the potency of my own energy. One day the family was on a dive boat heading out to the deep ocean when we spotted whales off in a distance. I was sitting on the bow of the boat with my Dad who suggested that I sing to bring the whales toward us. I began to channel all my energy from my heart to my soul, singing a song I did not know I knew. “Whales, whales. Whales come and play.” Thirty years later, I can still hear the tune perfectly in my head. On cue, the whales turned around and headed right for us. I continued to sing, my voice becoming shakier and shakier the closer they neared. Our whole boat encouraging me to keep going, even despite the waters around us getting rougher the closer the whales approached the boat.

Before I knew it, there they were: three magnificent humpback whales. We guessed it was a family as one was significantly smaller than the rest. My mum leaned over the side of the boat and one spy-hopped (nose up), reminiscent of when she would lean toward our dog and it would lift its nose up for a kiss. I hid in the captain’s quarters on a rickety stool with only 3-legs watching from a distance as the whales I manifested gave us a beautiful show. You could feel the aura of their size, for when they swam around the boat it tossed and turned like a feather in the wind, but every time they swam beneath, the waters became icily calm. They stayed with us for some time and my family swears that before they left they gave us a wave. Meanwhile, I was the most frightened I had ever been. I wish I could time travel back and hold my little-girl self’s hand and tell her it was ok so that I would not have missed it. But it wasn’t the whales that scared me, it was my own power that scared me most.

One could say that my singing and the whales coming were merely coincidence. We often write off evidence of the divine as happenstance, because believing in something greater than what we see before us is sometimes scarier than the evidence at hand. If this had been an isolated incident, then perhaps I would think this way too. But when we are willing to open our eyes, ears, and more importantly our heart, we begin to see evidence of the divine around us and within us in every moment. Maui happens to be a place where the divide between us and something greater is more permeable. People call that a vortex; a channel to the other side. A few other places in this world where I have felt similar energy are Bali, Ojai in California, and Varanasi in India.

We continued to travel to Maui as often as we could, but after my parent’s divorce in 2000, we never returned as a family. Time passed and in 2010 we lost my Mother to cancer. Maui came to represent more than just a place on a map or a vacation spot. It was the last place we were all happy as a family. This tiny island in the ocean came to represent “home”. When my Mom was dying, her request was to be cremated so she “could swim with dolphins”. Her favorite places in the world were beaches overlooking the Pacific Ocean from our hometown Santa Monica, to the shores of Maui. We honored her wishes and hired a company called the Neptune Society. They offer Memorial services on the water. On the day we scattered her ashes, I was disappointed when the Captain said that there would not be dolphins. They did not come to Long Beach Harbor, where we departed from, he explained. But I sung for them in my heart, anyway. I felt like that little girl in Maui calling them to us. As we read our readings and laugh-cried our memories, I continued to pray for dolphins. Despite being repeatedly told it would never happened, the minute Mum’s ashes hit the water two dolphins breached on the side of the boat. This time I was neither scared nor surprised. I knew exactly what it was and I thanked the universe for its beautiful gift. 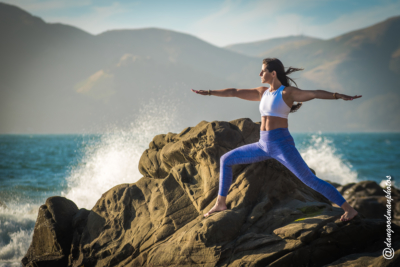 In 2016, I led a yoga retreat on the North Shore of Maui. It was the first time I had been back in a very long time. Part of my excitement to return was the hopes of reconnecting to my mother’s energy. I had not had a sign from her in some time, probably because of the layers that unconsciously build between us and the divine when we do not take the time to connect. Layers pile up from over-working, stress, and day-to-day living. I knew that if there were ever a place for me to reconnect to her, it was Maui. My retreat assistant and I came in a day early and immediately rushed to the ocean as if magnetized to it. There was not a clear entryway to the beach from where we were, so we went down a hidden path off the main road unsure of its destination. It felt like we were being led by something bigger than us. Ignoring the doubting mind, we forged on until we found ourselves on a cliff, high above the water. The sun was setting in the distance, the expansive Pacific Ocean laid out before us and as if on cue, a spout gushed from the water like a geyser. I knew I was home.

I felt my mother a lot on this trip. Every spot of a whale fin. Every familiar Hawaiian word or scent. But the big sign came on our group excursion. One morning we took everyone to Wailea on the other side of the island. Half the people were to take a stand-up paddleboard lesson and the other half of us went on a walking meditation. We only stayed in Wailea once as a family over all the years we traveled to that island. Our last trip we took together. Usually we were up the coast in Kaanapali. This meant I had only been to Wailea once in my life in 1998 (almost twenty years ago!) when I was a teenager, so there was little familiarity. We said our goodbyes to the ocean adventurers and I led the other half on the walking meditation up the coast. Unlike some resort centers in Maui where the beach spans for miles, the Wailea coastline is a bit more broken up and rocky. We watched our feet and contemplated every distinct step, including navigating narrow rocky points that jutted out into the water as if to stay “turn back”. But I felt impelled to continue. In walking meditation one usually watches their feet or what is in front of them, contemplating their surroundings. For this particular journey, we watched our steps and looked out at the water until we came to the end of the beach. When we finally looked inland, I instantly recognized the hotel we stood before. It was the last hotel I ever stayed in on Maui with my mum. I had not remembered the name or where it was, but I did not need to, because she brought me here. We stood for a while in front of this place that once represented family and home and when we finally turned to look toward the shore again and wouldn’t you know it, another huge splash from a distant whale.

The unseen and oft elusive pelvic floor is crucial

Life lesson from my toddler on the way to school:

We talk a lot about embracing this new body postpa

I get frustrated sometimes that things aren’t di

Meditating with young kids is messy. It doesn’t

Should our communities support us when we have kid

We’re rocking our bodies even though no kids!

We smile now (oh, and I have eyebrows) 🤍@regina

Independent play for the win! Keep it up kids. Mam

Hear ye, hear ye 🗣🗣napping with a child in y

Mamas, you can (and should) still take time for yo

Asking for a “friend” and by friend I mean all

#migrainelife is a tough one. I get a nonstop sta

What do you say to yourself on the days you don’

#momguilt is real and it sucks. When I’m with o

“Trauma-informed yoga is an individualized appro